David Bowie’s Never Let Me Down album, while frequently panned, then and now, by the musical elite (and by some fans) for not being his best work, holds a special place in my heart. It was at the time of this record’s release and subsequent world tour that I was most deeply immersed in my Bowie fandom. I had just begun publishing a David Bowie newsletter with legendary fan Rose Winters called ‘Bowie Bits’ (her name, not mine! It would soon be changed to ‘Sound & Vision’), and I followed the European and U.S. legs of that tour, reporting on the highly ambitious and wildly extravagant Glass Spider Tour shows. So now, 31 years later (egads!), the much-maligned Never Let Me Down album has been not just re-recorded but remade by former Bowie collaborators Reeves Gabrels, Mario McNulty and others, as part of an eye-popping 11-CD, 15-record box set called Loving The Alien (Warner Music/Parlophone), which will see its release on October 12.

Before I launch into all the info., which is head-spinning, have a listen to “Zeroes,” the first single from the collection.

Gone is the overbearing, leaden ’80s production, and in its place, a sleek, clean acoustic guitar centered mix that puts Bowie’s vocals up front and center, where they belong. From the original, they kept the best parts — David’s acoustic guitar and vocals, and Peter Frampton’s classy sitar lines, which come along like a delicate string of pearls to beautifully offset the otherwise sparse and understated instrumentation. The old version now sounds quite dated, but this sparkles brightly and sounds timeless. It’s exquisite.

As Reeves reveals in a recent BBC Radio 6 interview, David was not happy with the NLMD album. The year after it came out in 1987, he was already voicing his disappointment with the production. In 2008, he remixed “Time Will Crawl” with McNulty, recording new strings and new drums (courtesy of Bowie’s drummer from 1991-2004, Sterling Campbell, who is also on this upcoming release). In the album notes, Bowie wrote, “Oh, to redo the rest of the album.” He has now gotten his wish.

Other musicians featured on the reimagined Never Let Me Down album include David Torn on guitar and Tim Lefebvre on bass, who played on ★ (Blackstar). Also part of Never Let Me Down (2018) is a string quartet with arrangements by Nico Muhly and a special guest cameo by Laurie Anderson on Shining Star (Makin’ My Love).

For Gabrels, the re-recording of Never Let Me Down was an emotional undertaking. As he explains in the BBC Radio 6 interview,

The first song I worked on was Zeroes… One of the things that we used to do all the time was David and I would often record the acoustic guitars facing each other, both of us playing at the same time. It gave it a little more of a natural feel. So, we would record together. I had my headphones on, and I had my guitar that I was playing in my right ear, and David was in the left ear, and his vocal was in the center in the headphones. I had my eyes closed while I was tracking. And in my mind’s eye, I saw David sitting across from me, and the way his body language was, and the way his eyes would look while he was playing. Because he would get this faraway look, but he was looking at you at the same time. I recorded a pass of me playing acoustic guitar with David, and when I stopped, I opened my eyes, and I expected to see David sitting there. I got that feeling out of the way early, because I knew at some point I was going to hear his vocal or something was going to happen that would bring tears to my eyes… In my mind, he was there.

So, What’s Up With Reeves Gabrels? (in case you were wondering, and even if you weren’t)

While I’m on the subject of old flames… former Boston muso and Tin Machine member Reeves Gabrels has been working on various projects this past year which should hopefully see the light of day early 2011. That includes a project he’s doing with Earl Slick, Sterling Campbell, Lee Madalone on drums, Michael Houghton on vocals, and Freddie Villano on bass; his fifth solo album (with his Imaginary Fr13nds supporting); and an album with The Magnificent Others (which features fellow Modern Farmer Jamie Rubin, Marco Giovino on drums and Frank Swart on bass (and I guess Patti Griffin also? according to Reevz.net). They were all to be finished by late summer, so I guess now we’re just waiting.
share this: 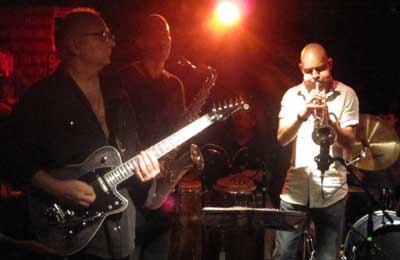 How exactly is it that it took me 14 years to see these guys live? That was the question looming in my head at the cozy Lizard Lounge, as Club D’Elf‘s adventurous jazz/dub/fusion excursions ran rampant and unchecked through my electrified, buzzing brain. This was a special occasion – part of a Memorial Weekend ‘guitar orgy’ which, on this particular night, was presided over by special guests Randy Roos and Reeves Gabrels. Reeves I have seen before, and it was good to see him again. Mr. Roos I wasn’t familiar with, but he’s a wildly impressive guitarist as well, and there was some good-natured ‘sparring’ (and at times delightful interplay between the two) which added even more enjoyment to a heaping helping of aural ecstacy.

END_OF_DOCUMENT_TOKEN_TO_BE_REPLACED

Happy Memorial Day Weekend, everyone – and let’s see how quickly I can do this and get it up. Starting tonight, there’s a four-day extravaganza over at Passim called The Campfire Festival. It’s quite a good bargain for the price, with loads of fantastic local artists and bands (just found the schedule, so click on in for details). Also tonight, I’ll be heading over to Lizard Lounge to check out Club d’Elf along with special guests Randy Roos, and – from the wilds of Nashville – Mr. Reeves Gabrels, who will surely be engaging in some mighty fine guitar wankery sorcery.