and The Airborne Toxic Event Saves Osheaga! (for a few hours, anyway)

Montreal, as viewed from Parc Jean-Drapeau

It was the smartest thing I could have done. Stuck in a nerve-wracking holding pattern for so long, getting nowhere, I needed something just outside my comfort level – the uncertainty of a long road trip in my beat-up ’93 Corolla, a looming border crossing, unfamiliar roads with speed signs in kilometers, and mostly unfamiliar language. Despite the edginess, there was this temporary freedom from the expected, the ordinary, the noose that had been tightening around my neck.

It was poetic and a very good omen that my first image after leaving my grateful car in a hotel garage was a park bench inscribed with the line,

“I loved you in the morning, our kisses deep and warm,
your hair upon the pillow like a sleepy golden storm.”

Leonard Cohen. A Canadian, of course.

From there I tried to get a feel of the city in a quick two days. Make that one day, as Sunday was spent tromping happily through the mud and delighting in some fine music at Osheaga.

I’d been in Montreal many years ago, during an even shorter rock concert stopover – moronically, in the dead of winter. Well, early March, which for Montreal is the dead of winter. But on this Saturday when I arrived, it was insanely hot. I wandered around the downtown area, taking in the sights and French sounds on Boulevard Saint-Laurent, the main drag, until I was nearly hallucinating from heat prostration and a 5am start time. I found my oasis at Café Pi, an ice-cold, dark cocoon of a coffee shop, with men at tables engrossed in games of chess.

From there, I stumbled haphazardly into gang territory, then a Native American pow-wow on rue Sainte-Catherine, then the sex shop district, and finally the metal and hardcore punk part of town. I was even invited to a bible class by a group of well-dressed Christian missionaries, when I stopped to ask for directions. It’s awesome when you’re in a foreign city and you have no idea where you shouldn’t go.

A European-style dinner at 10pm at an outdoor cafe was accompanied by the amusing entertainment of a table of inebriated young men finishing off quart after quart of Budweiser (shit man, seriously, you couldn’t do better than that?). Upon emptying one bottle, a guy would stagger off across the street with it, only to return soon after with another. Gotta love those laissez-faire liquor laws.

Parc Jean-Drapeau is why the Canadians are so much smarter than the Americans when it comes to these massive music festivals. It’s a beautiful park on an island, just one train stop from downtown Montreal, with a lovely view of the city, loads of shade trees, and a pleasant country stroll from stage to stage. Nothing was too far for the inebriated soldier. The only odd bit was the staircase over a roadway to get to the two smaller stages, but even that was mellow, like some magical passage into Oz. I have to assume there were other Americans there, and worse still, a strong East Coast contingent, so it would seem that everyone caught the laid back Canadian vibe. Totally chill.

A chance of storms had been predicted throughout the day, and I had to chuckle sardonically when the first torrential downpour began around 11am, while I was still at my B&B. But waiting at the front gates, the rain mercifully held off.

The smooth, romantic sounds of Peter Peter began my Osheaga experience; nothing quite like a good-looking boy singing in French. The rain was kept at bay for Montréal’s native son, but let loose again during The Airplane Boys’ raucous hip-hop. Which I thought I would have to ‘soldier through,’ awaiting Airborne. But I loved them! Big-hearted, socially conscious, enthusiastic, and defiantly upbeat in the face of violently inclement weather. This included some impressive breakdancing sans neck-breaking on a slick and sodden stage.

Airborne Tox were next, and sweet baby jesus, it had been too long. Bizzarly, I happened to plant myself not just in front of the stage, but right next to a couple from Southie of all places, who had also made the trip up for this band (big shout out, if they happen to see this).

The Airborne Toxic Event: the soundtrack of my soul.

Festival shows are always a crapshoot, for the bands as well as the fans. But The Airborne Toxic Event, being the consummate professionals they are, made the most of the smaller Scène Verte (Green Stage) and a brief 40-minute, mid-afternoon set. Switching gears from studio slumming for their third album, they sounded fantastic, and the energy from the enormous crowd made it feel like a celebration. Eight wondrous songs, with a heavy downpour starting three songs in – appropriately enough, for the rainy day somber musings of “Wishing Well.” But then something miraculous happened.

At the dramatic orchestral conclusion of the epic “Sometime Around Midnight,” the rain stopped. But it didn’t just slowly taper off. The downpour ceased abruptly and the sun immediately came beaming through the clouds as if heralding an awakening. It was enough to turn an athiest into a true believer. With umbrellas and rain ponchos tossed aside, “Missy” danced happily in the expansive sunshine.

Airborne videos: All At Once | All I Ever Wanted | Missy

I unintentionally caught part of Austra’s moody loveliness, mostly because 30 minutes after my Airborne fix I was still floating around Scène Verte in a pleasant daze. I did eventually drift over to the main stages, in-around-and-through sights and sounds from the Scène des Arbres (Tree Stage), Scène Piknic Electronik (Electronic Picnic), various and sundry booths, arts and happenings. It was like an acid trip without the metallic aftertaste. The Osheaga Magical Mystery Tour Medley follows. 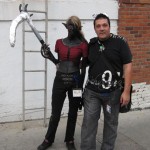 Mali’s Fight for Freedom, and Amadou & Mariam in Boston *tonight*